The Butchers' Bridge is Ljubljana's love bridge. It is a place where countless lovers have symbolically padlocked their love and dropped the keys into the river Ljubljanica, which flows underneath.

The Butchers' Bridge, built in 2010, connects the Central Market's colonnade, designed by the architect Jože Plečnik, with the Petkovškovo nabrežje embankment. It stands on the site where Jože Plečnik envisaged a bridge almost a hundred years ago. Its concept is to some extent artistic – it is adorned with statues and sculptures by the renowned Slovenian sculptor Jakov Brdar.

The Butchers' Bridge occupies the site in the midst of the former butchers' booths and Brdar's creepy but interesting large statues and small sculptures of deformed little creatures sitting on the parapet somehow refer to the story of this past. The large statue standing on the Petkovškovo nabrežje side of the bridge depicts Prometheus, while the miniature statues on the parapet playfully allude to the activity that once went on in the butchers' vending booths.

The striking contrast between Brdar's creepy figures and the love padlocks attached to the bridge's parapet makes one of the most unusual of the many romantic stories of Ljubljana. 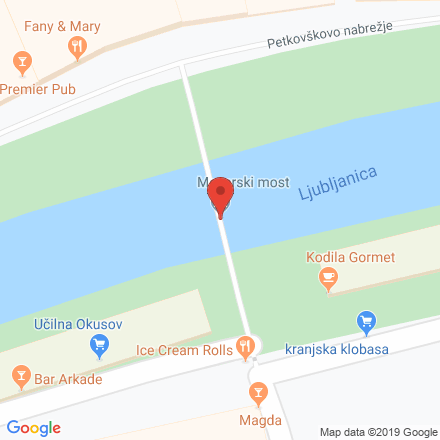