The site of the present Cobblers' Bridge, built by the architect Jože Plečnik between 1931 and 1932, was formerly occupied by a covered wooden bridge connecting the Mestni trg and Novi trg squares, two major parts of medieval Ljubljana. The bridge provided space for cobblers' workshops - hence the name Cobblers' Bridge. At its south end it was decorated with a statue of Christ, now kept in the Church of St. Florian. The 19th century saw the building of a new, cast iron bridge. On the initiative of the architect Jože Plečnik it was later moved to a site opposite Ljubljana's maternity hospital to connect the Zaloška cesta and Poljanska cesta roads.

Like Plečnik's Trnovo Bridge, the present Cobblers' Bridge was conceived as a broad balustraded platform connecting two different parts of the city. It was made of artificial stone like another of Plečnik's creations, the Triple Bridge. The characteristic appearance of the Cobblers' Bridge is due to its balustrades with short balusters and tall, different sized pillars topped with stone balls. The central two pillars support lamps and are slightly shorter, which gives the bridge a uniquely dynamic appearance. On the sides, the bridge platform is decorated with a geometric pattern. In 1991, all the balustrades were renovated. 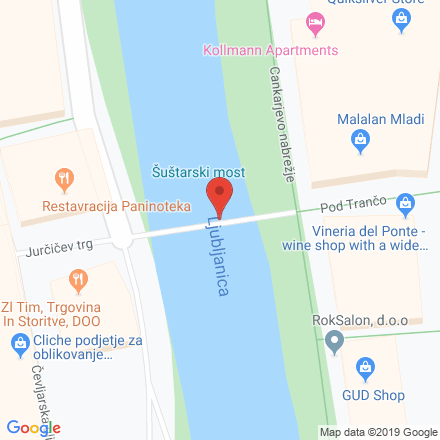