The Dragon Bridge, adorned with famous dragon statues, appears in the most recognizable images of Ljubljana. If you haven't been photographed next to a Dragon Bridge dragon, you can hardly claim that you have visited Ljubljana. The four dragon statues, which look slightly terrifying and almost real (if, of course, you believe that dragons might be real), are a masterpiece which has been exciting imagination since the bridge was built.

The attraction of the dragons aside, the bridge is a unique creation considered to be an extraordinary piece of technical heritage and a superb example of Art Nouveau architecture, which flourished at the turn of the 20th century. Constructed between 1900 and 1901, it was Ljubljana's first reinforced concrete structure and one of the largest bridges of its kind to be built in Europe. At the time of its opening, it was called the Jubilee Bridge of Emperor Franz Joseph I. According to original designs, it was supposed to be adorned with winged lions instead of dragons. It was the first structure in Slovenia to be paved with asphalt. The construction plans for the bridge were prepared by Professor Josef Melan, a famous engineer specializing in reinforced concrete bridges and the father of the theory underlying static calculations for large suspension bridges.

The Dragon Bridge was given its Art Nouveau appearance by the Dalmatian architect Jurij Zaninović, who studied under the famous Viennese architect Otto Wagner, one of whose pupils was also Ljubljana's great architect Jože Plečnik. Zaninović designed the concrete slabs in which the reinforced concrete structure is clad, the balustrades, and the sheet-copper dragon statues. The bridge's original decorations also include the parapet lamps, once powered by gas. 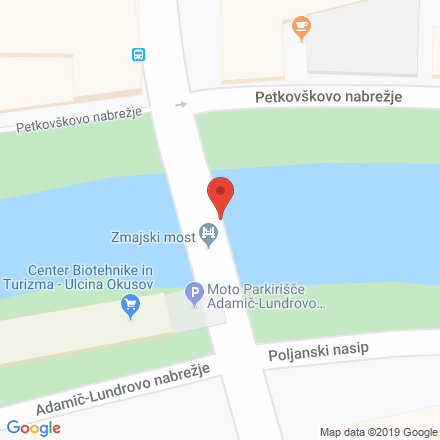