Church of the Annunciation

The Franciscan Monastery and the Church of the Annunciation are the two buildings contributing most significantly to the appearance of the Prešernov trg square, the central square in Ljubljana. Until the end of the 18th century, the monastery was the home of Augustine monks. The Church of the Annunciation was built between 1646 and 1660. Its façade, completed around 1700, rebuilt in the 19th century and renovated in 1993, is adorned with a copper statue of St. Mary, Ljubljana's largest Madonna statue.

The church has a monumental main altar built by the sculptor Francesco Robba in the middle of the 18th century. The inside of the church, painted with frescoes by Matevž Langus in the mid-19th century, assumed its present appearance after the earthquake of 1895. Between 1935 and 1936, the church ceiling was painted with frescoes by Matej Sternen. In a dedicated chapel there is a cross designed by the architect Jože Plečnik. 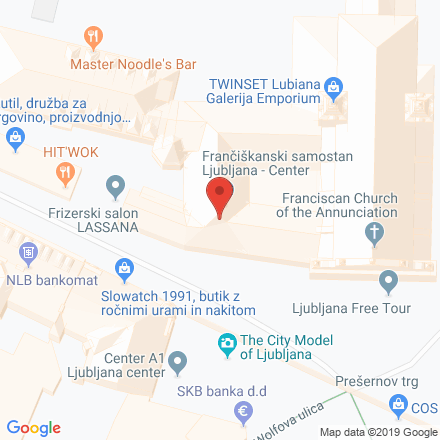