Kamnik's Franciscan Monastery was built in 1492. The parts of the monastery open to public viewing include the 20th century architect Jože Plečnik's famous Chapel of the Holy Grave (Kapela Božjega groba) and a magnificent Franciscan library. The inside of the monastery's Baroque Church of St. James (Cerkev sv. Jakoba) is adorned with paintings by the Kamnik-born painter Stane Cuderman, created in 1937. The monastic chapel, dedicated to the memory of World War I and thoroughly renovated by Jože Plečnik in 1956, is one of the master architect's last works. The monastery's library, founded in 1627, keeps a number of early books (incunabula) printed before 1550, a copy of the first Slovenian translation of the Bible, published by Jurij Dalmatin in the 16th century, and over 10,000 other books printed before 1799.

A tourist visit of the monastery is possible on prior appointment only. 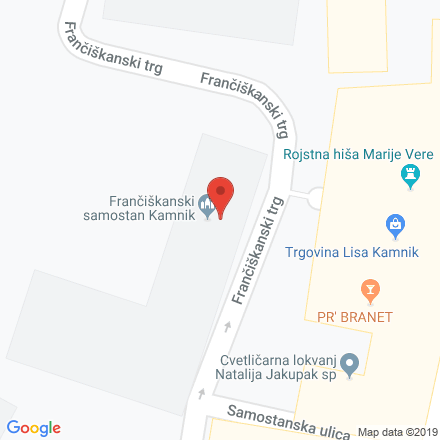