The Grand Hotel Union is Ljubljana's first modern hotel. At the time it was built it was the city's largest building boasting the biggest function hall in the Balkans, which was, due to its complex iron roof structure, considered to be a great technological achievement. The hotel, measuring almost 100 meters long, was built between 1903 and 1905 after designs by Josip Vancaš.

The entire building, both its façade and interior furnishings, which include the copies of a rich collection of etched glass panes, is designed in the Art Nouveau style. It consists of two wings connected by a protruding domed corner turret. The façade is ornamented with plant motifs, which vary from floor to floor. Since its construction, the hotel has been redecorated twice, but its original Art Nouveau character has been preserved. 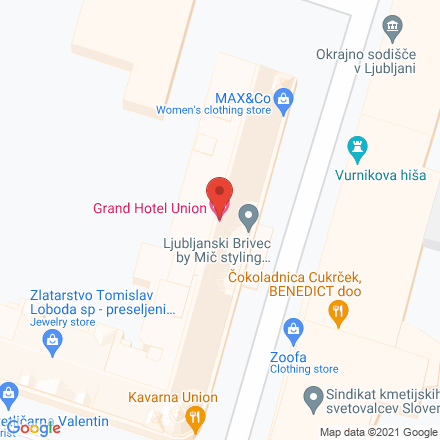