The site of the present Kongresni trg square was occupied by a small square already back in the Baroque period. The original square was thoroughly reconstructed for the 1821 Congress of the Holy Alliance and named after it.

Its south end, the site of the former Provincial Mansion, where the Congress took place, is now occupied by the University of Ljubljana building. Not far away from it is the Slovenian Philharmonic building and next to it a Bidermeyer building housing the oldest Slovenian publishing house, Slovenska matica, established in 1894. The north end of the square is occupied by the neoclassical Kazina building. The Zvezda park, which stretches across the central part of the square, is the site of several historical attractions.

Amid the remains of the town walls of the Roman Emona stands a copy of the gilded bronze statue of a Roman patrician excavated from a site next to the Kazina building in 1836. In Roman times, the area was the site of a burial ground. In accordance with Roman tradition, Emona's burial grounds were situated outside the town walls. The Emonian statue was buried together with the cremated remains of the deceased and a number of objects indicative of the fact that he was a distinguished citizen living in Emona at the beginning of the 2nd century AD, during the rule of Emperor Trajan.

On the other side of the park stands a picturesque music pavilion. An anchor statue on a plinth was placed in the park in 1954 to commemorate the annexation of the coastal region of Primorje to Slovenia. In 1927, a copy of the Holy Trinity Column supposedly created by Francesco Robba in 1722 was erected across the road from the Ursuline Church. The original is kept at the City Museum of Ljubljana. 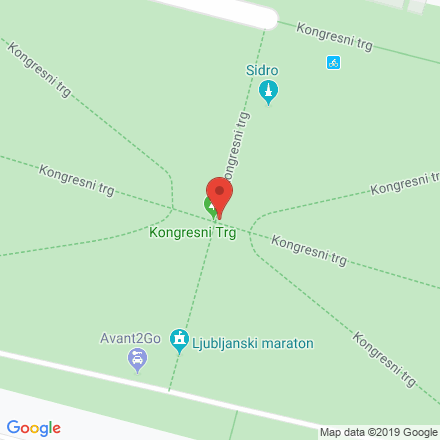