The Križanke Summer Theatre is one of Ljubljana's principal architectural attractions. Between 1952 and 1956, the architect Jože Plečnik converted this former monastery of the Teutonic Order, originally built in the thirteenth century, into one of the city’s main cultural venues.

The outdoor Summer Theatre, with a capacity of 1,400, regularly hosts concerts of various types and is one of the main venues for the summer Ljubljana Festival.

The conversion of the Križanke complex was Plečnik’s last project. It also marked the completion of his extensive restyling of French Revolution Square (Trg francoske revolucije) and nearby Vegova Ulica. A monument to Napoleon’s Illyrian Provinces, designed by the sculptor Lojze Dolinar, was erected in the square next to Križanke in 1929.

Plečnik followed Renaissance principles in his approach to the Križanke complex. A row of windows in the monastery wall offered a view into the interior. Other solutions include an original paving design and numerous lights on the courtyard walls.

The Križanke complex also includes an atrium of an original design, a small cultural venue in the Devil’s Courtyard and the notable baroque church dedicated to Our Lady, Help of Christians, built between 1714 and 1715 by Domenico Rossi, one of the leading Venetian architects of his day. 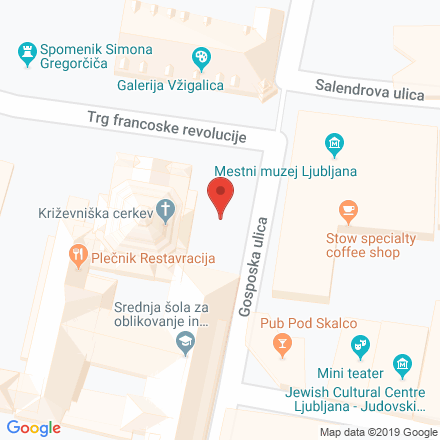