The Levstikov trg square was laid out by the architect Jože Plečnik between 1926 and 1927, at the time when it was still called Šentjakobski trg. Plečnik had a line of poplars planted to separate the immediate vicinity of the Church of St. James (Cerkev sv. Jakoba) from the rest of the square, previously occupied by a Jesuit monastery which burnt down in 1774. Plečnik landscaped a small park surrounded by a row of stone balls and a line of round-crowned maple trees.

The square is the site of St. Mary's Column (Marijin steber), topped by a statue of the Virgin cast between 1681 and 1682 by the Salzburg-based artist Wolf Weisskirchner. In 1938, the column was replaced by a new one designed by Jože Plečnik and the square's Baroque stone fountain was moved to the border between the square's austerely designed part and the part planted with trees, symbolizing nature. 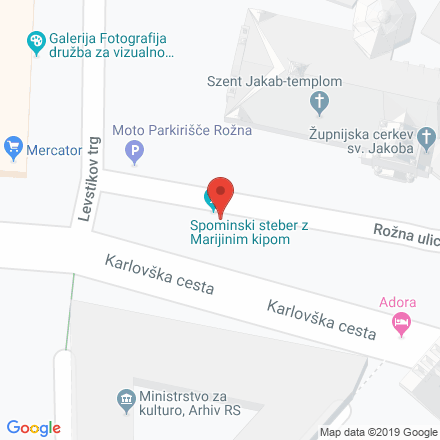