The length of the Ljubljanica river embankments landscaped by the architect Jože Plečnik extends all the way to the Ljubljanica River Barrier, located by the Cukrarna building, where Plečnik envisaged a monumental triumphal arch in order to symbolically mark the point where the river leaves the city. Plečnik's original designs of the early 1930s were later considerably revised and the Barrier was only built between 1939 and 1944.

Due to its specific construction, neither the mechanism for raising and lowering the barrier nor any other technical elements are visible. The Barrier consists of three towers, one next to each river bank and one in the middle of the river. Covered in stone, the towers are reminiscent of ancient Egyptian temple architecture. Their tops are enhanced by decorative garlands. On one side, the towers are decorated with Doric columns and Etruscan-looking vessels with carved dragon heads, and on the other with low Ionic towers with stylized human heads supporting a footbridge across the river.

On each end of the barrier, a door with a monumental portal prevents access to the barrier mechanism. The monumentality of the Ljubljana River Barrier is matched by Plečnik's design of a riverside park in the Ambrožev trg square and a park in the Vrazov trg square on the other bank of the river. 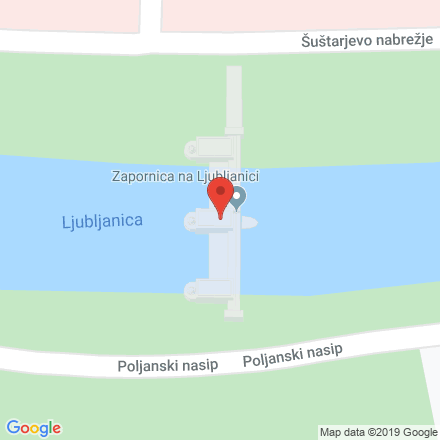