Being Slovenia's main museum of national history, the National Museum keeps a number of finds from Slovenia considered to be important treasures of the world's cultural heritage. One of the most outstanding is the 60,000 year old Neanderthal flute from the Divje Babe excavation site.

The National Museum of Slovenia is housed in a centrally located neo-Renaissance palace built between 1883 and 1885 to designs by Viljem Treo. The Museum's history goes back to 1821, to the foundation of its predecessor, the Provincial Museum of Carniola.

Prehistoric Treasures of the National Museum of Slovenia

This exhibition brings together the most important archaeological finds from the National Museum of Slovenia's prehistoric collection, including, among others, the Neanderthal flute from the Divje Babe excavation site, which is considered to be the world's oldest musical instrument, and the famous Vače Situla, an Early Iron Age ritual vessel found in the village of Vače.

Roman Stories from the Crossroads

The exhibition brings together archaeological finds from the time when the territory of the present-day Slovenia was part of the Roman Empire. It was set up to mark the 2000th anniversary of Emona, a city that stood on the site of the present-day Ljubljana in Roman times. Over a thousand objects on exhibition include an imperial construction inscription dated to 14 or 15 AD, which provides evidence on the time of the foundation of Emona. Another important exhibit is a gilded bronze statue of a citizen of Emona. The exhibition also includes films, sculptural reconstructions, and reconstruction paintings.

The Roman Lapidarium is a collection of more than 200 stone monuments bearing Roman Latin inscriptions and dating from the 1st to 4th centuries AD. Most of the monuments, displayed on the ground floor of the museum building and in a glass pavilion situated in the Museum's courtyard, were found on the site of Emona (Ljubljana in Roman times), the Ižanski kot area, the town of Trojane, and the regions of Zasavje and Dolenjska.

Admission to the Museum 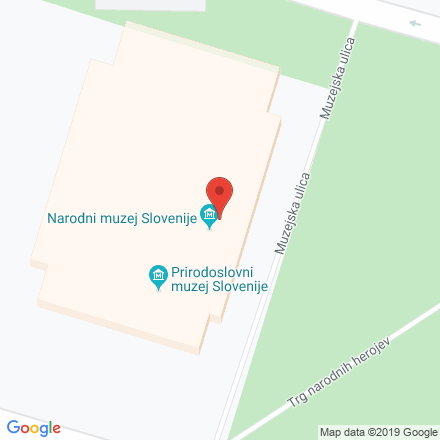