Get to know the life and work of the famous architect Jože Plečnik, who left an indelible mark on the cityscape of Ljubljana. At Plečnik House you can see the architect's home exactly as it was in his lifetime and view a permanent exhibition showcasing his work.

The exhibition gives you an insight into Plečnik's life and work, focusing particularly on the architect's creations in Ljubljana, where he returned in 1921 following a successful career abroad, first in Vienna, where he created a number of pioneering works of modern architecture, and then in Prague, where, among other things, he renovated Prague Castle after it had become the official residence of the Czechoslovak president.

The exhibition brings together not only sketches, plans, models, and photographs relating to Plečnik's famous creations such as the National and University Library in Ljubljana, the Ljubljana Central Market, and the Church of St Michael in the Marshes, but also plans for buildings that never saw the light of day, the most notable being the Cathedral of Freedom, intended to house the Slovenian Parliament.

Plečnik House comprises a complex of two neighbouring houses and an adjacent garden with a lapidary, which, along with Plečnik's original furniture, library, drawing tools, personal belongings, and a large archive of sketches, plans, photographs, and models all form part of the Plečnik Collection.

One of the two houses within the complex was bought by the architect's brother Andrej in 1915. When Plečnik returned to Ljubljana in 1921, he and his two brothers and a sister decided to live together, so the architect built a cylindrical annexe to the house (1925). Later he added a glassed porch and, after purchasing an older suburban house next door, a conservatory (1930). Despite the agreement between the siblings to live together, only the architect's brother Janez lived in the house for a while. When he moved out, Plečnik refurbished the house to make it suit his own requirements. The refurbishment and extension works to the two houses were often done using leftover materials from Plečnik's other projects.

The architect Jože Plečnik (1872-1957) came a long way from being an apprentice at his father Andrej's cabinet-making workshop to becoming a highly regarded architect, a well-respected professor at the Ljubljana Faculty of Architecture, and the recipient of numerous national and international accolades. His visionariness and original approaches continue to inspire architects and architecture enthusiasts around the world. 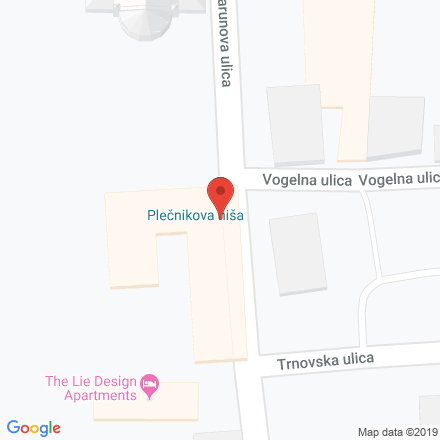