Ljubljana is probably one of the few cities in the world whose central town square is adorned with a statue of a poet rather than some political or military hero. The poet, France Prešeren (1800–1849), who wrote mostly in Slovenian and is best known for his sonnets, was one of Europe's great Romantic poets.

The squares' Prešeren Monument, designed by the architect Maks Fabiani and the sculptor Ivan Zajc, was unveiled in the autumn of 1905. It depicts the greatest Slovenian poet and the muse of poetry holding spring of laurel above his head. The poet's statue is symbolically faced by the statue of Julija Primic, his great love, mounted on the facade of a building located across the square, in the Wolfova ulica street.

The Prešernov trg square developed from a road junction in front of one of the city gates leading to medieval Ljubljana. Next, to the junction, a Franciscan church of the Annunciation was built in the 17th century, but the junction was turned into a square and paved only after the city walls were pulled down in the middle of the 19th century.

In the aftermath of the devastating earthquake of 1895 the square saw the building of several bourgeois palaces: Frisch House (Frischova hiša) and Seunig House (Seunigova hiša) at the lower end of the Čopova ulica street, the building currently housing the Centralna lekarna pharmacy, Urbanc House (Urbančeva hiša), Hauptman House (Hauptmanova hiša) and Mayer Palace (Mayerjeva palača), the latter built thirty years after the earthquake. Across the river from the square, Filip Mansion (Filipov dvorec) and the Kresija municipal office building were built by the Graz-based architect Leopold Theyer.

The first decade of the 20th century saw the Art Nouveau refurbishment of Hauptman House and the building of Urbanc House, one of Ljubljana's most beautiful Art Nouveau buildings, which housed the city's first department store. Between the two World Wars, as a final touch to the square, the Mayer department store was built on the south side of the square. When the architect Jože Plečnik's Triple Bridge was built, the square extended to the other side of the Ljubljanica river and assumed its present appearance. 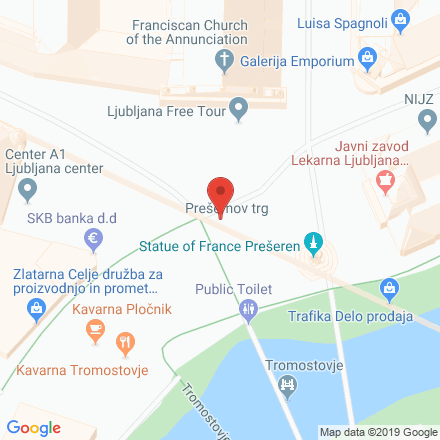