The Slovenian National Drama Theatre of Ljubljana (SNT Drama Ljubljana) is Slovenia's main dramatic theatre. Its repertoire includes both classic plays and contemporary and experimental works for the stage. It regularly produces interesting new works by Slovenian and European playwrights.

At the turn of the 20th century, Ljubljana saw the building of a Slovenian theatre, the present Opera House. Soon after, a German theatre, now known as the Drama Theatre, was built by the city's pro-German citizens organised into the German Theatrical Society in Ljubljana (Deutscher Theaterverein in Laibach).

The German Theatre was constructed between 1909 and 1911 to a design by the Viennese architect Alexander Graf, who also designed several theatres commissioned by the German community in Czechoslovakia. Ljubljana's German Theatre is a copy of Graf's theatre in the Czech town of Ústí nad Labem. Its interior is richly decorated, the vestibule in the neoclassical style. The theatre's exterior is adorned with Art Nouveau ornaments. The entrance is surmounted by a balcony supported by columns. One of the building's most striking elements is a triangular gable which originally carried the inscription "Deutsches Theater" (German Theatre).

For a time during World War I, the building housed a cinema. After the war it passed into the hands of the Slovenian National Drama Theatre of Ljubljana and became one of Slovenia's major theatres. 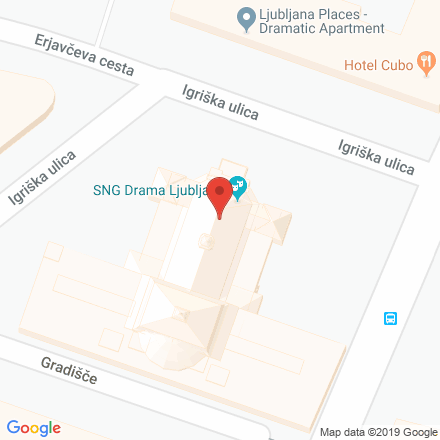