The Slovenian Philharmonic (Slovenska filharmonija) is one of the world's oldest institutions of the kind. Its rich history dates back to 1701 when the first musical association and main promoter of Baroque music in Slovenian inhabited areas were established under the name of Academia Philharmonicorum. In 1794 the Academia was succeeded by the Philharmonic Society, the Slovenian Philharmonic's immediate predecessor, whose members included composers such as Josef Haydn, Ludwig van Beethoven and Johannes Brahms, and the violinist Niccolò Paganini. Franz Schubert applied for the post of a music teacher and Gustav Mahler was one Academia's conductors between 1881 and 1882.

The Slovenian Philharmonic Building was constructed in 1891 on the foundations of the former Estate Theatre (Stanovsko gledališče), built in 1763 to mark Emperor Joseph II's formal visit to Ljubljana and destroyed in a fire in 1887. As a result of a competitive tender, the Graz-based Austrian architect Adolf Wagner was commissioned to develop the plans for the Slovenian Philharmonic Building. The building's façade was designed in the neo-Renaissance style with rounded corners characteristic of theatre buildings of the time. In 1937, the architect Jože Plečnik added an annexe at the back of the building and redesigned the back facade. The entire building was thoroughly restored in 2001.

The Slovenian Philharmonic Orchestra has a proud tradition as the country's leading symphony orchestra. It lives up to its reputation with numerous guest appearances in European cultural metropolises and the United States, as well as concerts at important international festivals. The Orchestra has played with the world's biggest names in classical music including, among others, Carlos Kleiber, Riccardo Muti and Zubin Mehta. After its re-establishment in 1947, the orchestra was led by recognized conductors, among them by Bogo Leskovic, Samo Hubad, Lovro von Matačić, Oskar Danon, Uroš Lajovic, Milan Horvat, Marko Letonja and George Pehlivanian. Its current artistic director and chief conductor is maestro Philipp von Steinaecker, appointed in the season 2019/20. 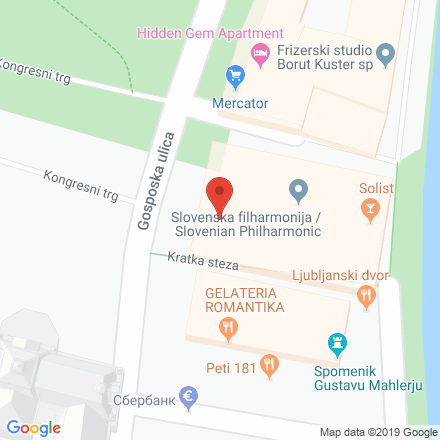