Ljubljana's Town Hall (locally referred to as Mestna hiša, Magistrat or Rotovž), is the seat of the Municipality of Ljubljana. It was built in the late 15th century by the master builder Peter Bezlaj. It assumed its present appearance between 1717 and 1719, when an annexe designed by Carlo Martinuzzi was added to it by the master builder Gregor Maček Snr. Later the building was alterated several times, the most thoroughly by the architect Svetozar Križaj in 1963.

The Town Hall façade reflects Venetian architectural influences. The vestibule provides space for a late Gothic plaque with a coat of arms surviving from the original Town Hall building and a 17th century statue of Hercules with a lion, previously a part of the Hercules Fountain which used to stand in the middle of the nearby Stari trg square. In the Town Hall's arched courtyard stands Francesco Robba's Narcissus Fountain (Narcisov vodnjak) from Bokalce Castle (Grad Bokalce). Next to the staircase there is a monument in memory of Ivan Hribar (1851-1941), a famous mayor of Ljubljana.

Exhibitions in the Town Hall

Ljubljana Town Hall features four exhibition spaces: the Glass Atrium, the Historical Atrium, the Central and Right Atriums. The primary purpose of the exhibition space is to showcase projects by the Municipality of Ljubljana. Also on display are exhibitions organized through international and inter-city partnerships, individual and group exhibitions of fine art by established and amateur artists.

The tour of Ljubljana's Town Hall includes a number of rooms which have so far not been open for public viewing. It offers an insight into the rich history of a building which stands as one of Ljubljana's most striking Baroque monuments. 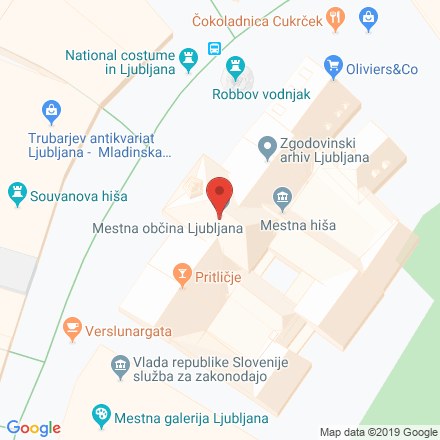