The central of the three bridges forming the Triple Bridge has stood in its place since 1842, when it replaced an old, strategically important medieval wooden bridge connecting the north-western European lands with south-eastern Europe and the Balkans. Between 1929 and 1932, the side bridges, intended for pedestrians, were added to the original stone bridge to a design by the architect Jože Plečnik, who thus created a unique architectural gem of Ljubljana.

Plečnik removed the metal railings from the old stone bridge and furnished all the three bridges with massive stone balustrades and lamps. From each of the side bridges, two stairways lead to terraces situated just above the river, where poplar trees were planted to contribute to the overall appearance of the Bridge.

On the right bank of the river, the Bridge is enhanced by a small flower shop connected to the Ljubljana Central Market colonnade, and on the left bank by a kiosk. It has a key position on the crossing of Plečnik's two urban axes, the river axis and the axis running between the Rožnik and castle hills. In 1992, the Triple Bridge was thoroughly renovated. 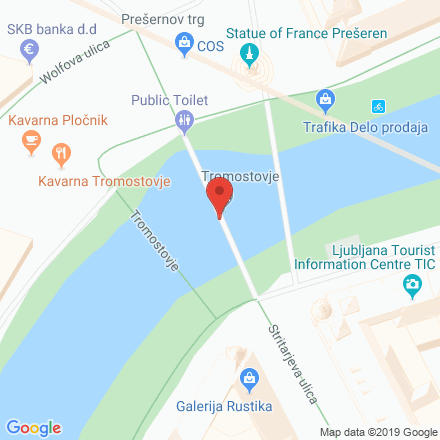