Trnovo Bridge, built between 1929 and 1932, was at the heart of Jože Plečnik's project of the Gradaščica channel embankments' reconstruction. It was designed with respect to the features of the Trnovo Church (Trnovska cerkev) across the way from it: the Bridge forms an extension to the church square and the pyramids adorning it imitate the shape of the Church's spires.

Trnovo Bridge's other adornments include massive balustrades, two rows of short columns and Nikolaj Pirnat's stone statue of St. John the Baptist, the patron of the Trnovo Church. The Bridge's most remarkable decorative element are two rows of birch trees planted into the bridge. At the sides, the Bridge is covered with roughly finished stone blocks. On the end facing the suburb of Krakovo, there is stone plaque carrying the name "Krakovo", and on the end facing the suburb of Trnovo a plaque saying "Trnovo" 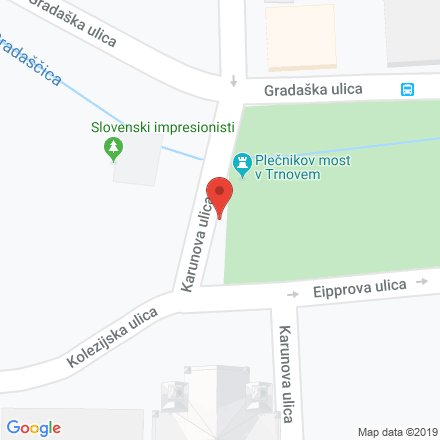