Church of the Holy Trinity

The Ursuline Monastery and the Church of the Holy Trinity, also referred to as the Ursuline Church (Uršulinska cerkev), are situated on the Slovenska cesta road, across the way from the Kongresni trg square. It was commissioned by Jakob Schell von Schellenburg, a wealthy local merchant and financier, and his wife Ana Katarina. During the construction of the Trg republike square, the Monastery underwent a thorough reconstruction and its garden was completely destroyed.

The Church of the Holy Trinity was built by the architect Carlo Marinuzzi between 1718 and 1726. Its undulating façade enhanced by semi-columns and a characteristic gable inspired by the famous Roman architect Francesco Borromini make it one of Ljubljana's most unusual Baroque monuments. Unlike typical Baroque churches it is not painted inside. Still, it keeps a large number of significant works of art.

The main altar was carved from multicoloured African marble by Francesco Robba between 1730 and 1740. The most beautiful of the four side altars, referred to as Ecce homo, was made by Henrik M. Löhr. The Church's most notable paintings include Jacopo Palma Jr.'s large-format paintings of Virgin Mary with the Saints, St. Louis of Toulouse and St. Bonaventura, and Valentin Metzinger's paintings of St. Ursula and St. Augustine.

After the earthquake of 1895, the Church's original belfry was pulled down and rebuilt. Between 1930 and 1931, a balustraded stairway leading to the main entrance was built to a design by the architect Jože Plečnik. The side wings of the Monastery and its bottom floor were renovated by the architect Anton Bitenc and his team in 1966. 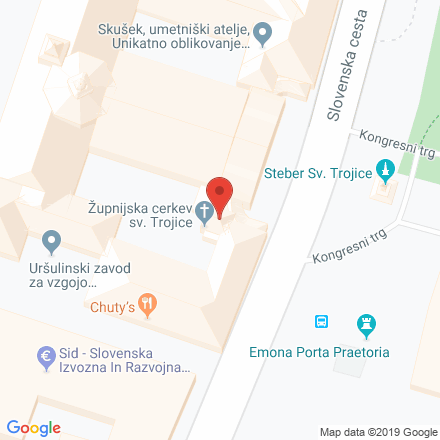