In the early 1930s, Ljubljana's municipal authorities made a decision to convert the Holy Cross Churchyard (Pokopališče pri sv. Križu) for use as Ljubljana's main cemetery. When the plans provided by the architect Ivo Spinčič in 1936 failed to please the authorities, a new design was commissioned from the architect Jože Plečnik. 1940 saw the completion of an unconventionally designed funeral home called Žale, which housed Ljubljana's first chapels of rest and was quite unlike any other funeral home of the time. Its name subsequently became the name of the entire cemetery complex.

The entrance to the Žale Cemetery is marked by a monumental arch with a two-storey colonnade, which symbolically divides the world of the dead from the world of the living. The arch is topped with a double statue of Christ and St. Mary the Protectress. Opposite the arch stands the cemetery's main oratory, inspired by classical models. It is adorned with a canopy supported by four columns, intended for public farewell ceremonies.

Chapels of rest are designed on a variety of different architectural models, from classical Greek to Byzantine and Oriental. Some are based on a combination of the three styles, some on pure imagination. In this way, Plečnik enhanced the concept of equality of all religions. Here and there, small statues are built into the chapels' façades. Chandeliers and crosses were specially designed for each chapel. The funeral home complex also includes an interesting building decorated with fresco paintings by Slavko Pengov, which houses carpenters' workshops. 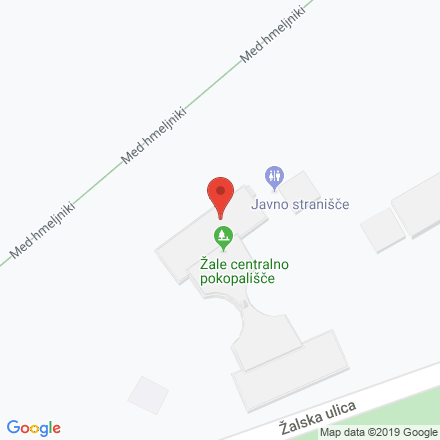