The Church of St. James (Cerkev sv. Jakoba) was built by Jesuits between 1613 and 1615 on a site previously occupied by a Gothic church standing next to the Jesuit monastery which housed Ljubljana's first college of theology, philosophy, medicine and music. The Jesuits' early-Baroque hall church was thoroughly rebuilt around 1701. Its new altar and statues were sculpted between 1728 and 1732 by Francesco Robba, who lived in the vicinity of the church. After the earthquake of 1895 the church's two belfries had to be pulled down and a single new belfry (the highest in Ljubljana) was built in their place.

The octagonal Chapel of St. Francis Xavier (Kapela sv. Frančiška Ksaverija), inspired by Venetian models and extravagantly decorated with ornate plasterwork, was added to the church between 1667 and 1670. The chapel boasts a famous altar built between 1709 and 1720, which is adorned with Paolo Groppelli's statues of archangels and Jacopo Contieri's statues of Europe and Africa. The stone altars in the church's side chapels were sculpted by the Venetian sculptors Angelo Putti, Jacopo Contieri, Francesco Rottman and Francesco Robba. The most outstanding altar painting is The Death of St. Joseph (Smrt sv. Jožefa) by Franc Karl Remb.

When the Jesuit college building burnt down, a square was built in its place. Between 1681 and 1682, St. Mary's Column (Marijin steber), topped by a statue by the Salzburg-based artist Wolf Weisskirchner, was erected in the middle of it as an expression of thanks for the Slovenian lands having been spared from Turkish rule. The column was moved to its present location by Jože Plečnik, who redesigned the square in 1927. Plečnik surrounded the square by a row of stone balls and added the greenery in its upper part. To connect two separate sections of the Rožna ulica street, a raised building arching across the road running along the side of the square was later designed by the architect Boris Kobe. 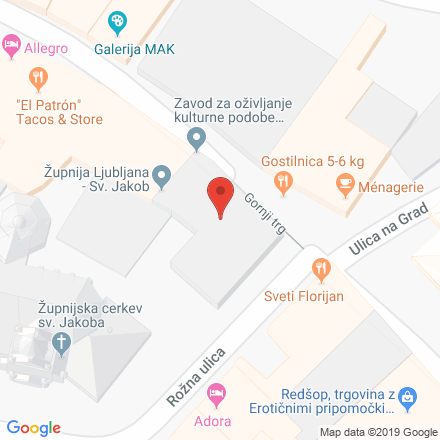