The ensemble of the Slovenian National Opera and Ballet Theatre of Ljubljana (SNG Opera in balet Ljubljana) performs an extensive repertoire of classical and modern operas, ballets and concert works. Each season it gives approximately 150 performances, both at home and abroad. Its opera and ballet ensembles and orchestra have enjoyed successful collaborations with Slovenian and international artists and producers. The Theatre's most acclaimed international co-production projects of recent years include Faust, Aida, The Nymphs of the Rhine and The Love for Three Oranges, to name just a few.

The theatre building, constructed in 1892, has a varied history. At the turn of the 20th century it housed first the German Theatre (Nemško gledališče) and then the Provincial Theatre (Deželno gledališče). 1918 saw the establishment of the theatre's opera and ballet ensembles and orchestra, which, after the Second World War, began to tour outside the country and receive international acclaim.

The Theatre's Information Centre and Box Office are open 10:00-17:00 Monday to Friday.

The Ljubljana Opera House, previously the home of the Provincial Theatre (Deželno gledališče), was built between 1890 and 1892 to a neo-Renaissance design by the Czech architects Jan V. Hrasky and Anton Hruby. Before the construction of the German Theatre (the present Drama Theatre) in 1911, the building was a venue for productions in both Slovenian and German, and afterwards only for those in Slovenian.

The Opera House's façade has two niches adorned with Alojzij Gangl's allegorical statues of Tragedy and Comedy. The building's characteristic appearance is mainly due to the richly adorned front façade with Ionic columns supporting a majestic tympanum above the entrance. The allegorical sculptures in the tympanum represent Poetry and Glory, and the figure with a torch above them - another work by Alojzij Gangl - an allegory of Genius. The stone pedestals in front of the building support the busts of the Slovenian theatre artists Anton Verovšek and Ignacij Borštnik sculpted by France Kralj in 1921, and the pedestal by the side of the building Stojan Batič's portrait sculpture of Julij Betetto. 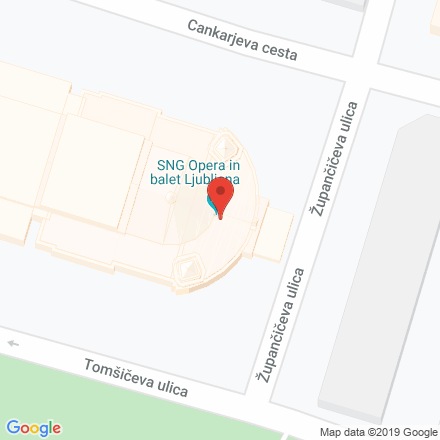