The Križanke Open Air Theatre is managed by the Ljubljana Festival. It was formerly the oldest monastery in the city that belonged to the Teutonic Knight’s order. Renovated to the plans of architect Jože Plečnik in the 1950s, the Križanke complex is considered to be one of the most beautiful and acoustic open-air venues in Slovenia.

The big stage with an orchestra pit is suitable for various theatrical and musical stagings (operas, operettas, ballet, etc.), for symphonic concerts, theatre productions as well as pop and jazz concerts. It has also been occasionally used as banqueting venue for larger events. The theatre is outfitted with a large sliding roof that allows performances to run undisturbed even in the case of bad weather.

A distinctive feature of the Entrance Hall (open-air) is the sgrafitto decoration on the walls, which were adorned with bas-relief figurines that originate from the Czech medieval art. Special attention was also dedicated to a uniform pavement pattern, linking together the various architectural components of this space, which is a popular setting for concerts, performances or receptions in the warmer months.

Possibly the most picturesque setting in the Križanke complex, the Devil’s Courtyard, was originally designed by Plečnik to serve as a venue for small chamber performances. There is a net of lights, built into the ceiling, giving an impression of a starry sky. The Devil’s Courtyard is a beautiful setting for receptions. Another function space is the Knights’ hall, once the monastery’s refectory. 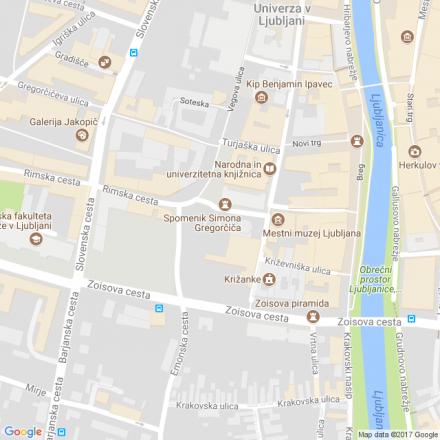