The National Gallery of Slovenia is an art museum with one of the longest traditions in Slovenia and it stores the largest collection of art works on the Slovenian territory, from the High Middle Ages through the 20th century.

In early 2016, after four years of refurbishment a renovated National Gallery was opened. For the first time in history all three parts of the building galleries are connected - the oldest and now completely renovated National House from 1896, Ravnikar new wing from 1993 and the glass entrance hall from 2001.

In the oldest part of the National Gallery, Narodni dom, there are 6 rooms or spaces available for receptions, events and congresses, ranging from the Grand hall to Golden hall, which has been completely renovated to the creative studio with a view on the Tivoli Park. The diversity of spaces allows for the organization of various events; receptions, awards, concerts, temporary exhibitions, lectures, creative workshops and others.

The oldest part, Narodni dom, and the New Wing are connected with the glass extension, which became a and modern lobby with the original Robba's Fountain placed in it. This air structure with a glass facade facing Tivoli Park, measuring 1,675 m2, is one of the most elegant functional rooms in the city centre. The space can, on three levels, accommodate up to 1.000 guests for a standing reception. 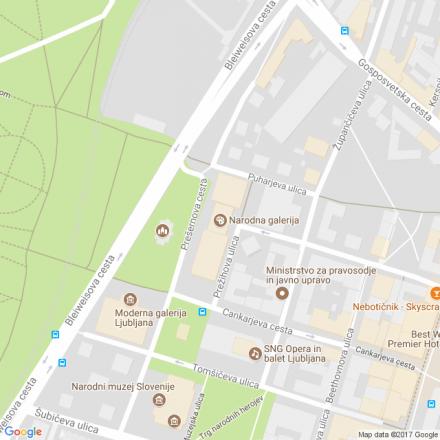