The Ljubljana Opera House, previously the home of the Provincial Theatre (Deželno gledališče), was built between 1890 and 1892 to a neo- Renaissance design by the Czech architects Jan V. Hrasky and Anton Hruby. The building's characteristic appearance is mainly due to the richly adorned front façade with Ionic columns supporting a majestic tympanum above the entrance; its façade features two niches adorned with Alojzij Gangl's allegorical statues of Tragedy and Comedy.

The year 1918 saw the establishment of the theatre's opera and ballet ensembles and orchestra and today - apart from some regular programme novelties, offered to its audience every season, the central Slovenian Musical Theatre boasts a wide repertoire of operas, ballets and concerts that derive from both modern and classical creativity, as well as around 150 season and off-season repeat performances on stages at home and abroad. Its opera and ballet ensembles and orchestra have enjoyed successful collaborations with Slovenian and international artists and producers. The Theatre’s most acclaimed international co-production projects of recent years include Faust, Aida, The Love for Three Oranges, Don Quixote, Prince Igor and The Rhine Nymphs, to name just a few.

The Opera House is also an attractive venue for holding social functions, ranging from award presentations to receptions and gala dinners, which may be placed on the stage. 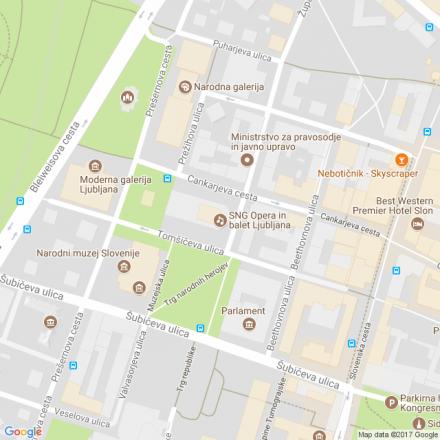