Jože Plečnik's unconventional design for the Church of St. Francis (Cerkev sv. Frančiška), constructed between 1925 and 1927, is derived from his plans for the Church of the Sacred Heart in Prague, built in 1922. The central part of the church is covered with a gently sloping roof topped with a belfry added in 1931. The belfry has a distinctive shape dominated by two rows of pillars in its upper two storeys and a conic roof sloping up steeply.

The main entrance is enhanced by a monumental colonnade with an open tympanum. The inside of the church is unusual. Its central space is framed by a row of monumental brick columns, on the outer side of which, next to the walls, there is enough space to walk all the way around the central part of the church. The main altar is positioned right next to the colonnade, at a distance from the church wall behind it. It is flanked by side altars, which are also positioned next to the rows of columns.

Later, when the church was already in use, Plečnik occasionally added new elements to it. He furnished it with chandeliers and, after World War II, decorated the church's Chapel of Our Lady of Sorrow, baptistery and sacristy. 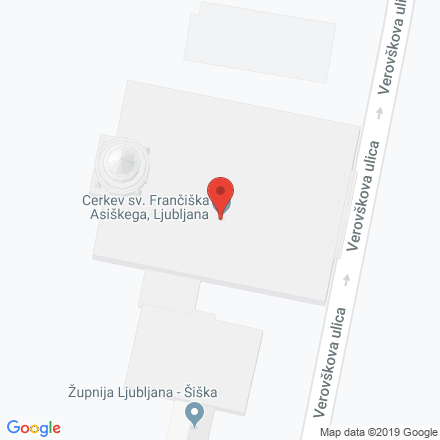